In July of 1860, twelve Masonic brethren of Hopkinton petitioned the Grand Lodge of Massachusetts for a dispensation for a lodge. On July 25, the dispensation was granted by M.W. Winslow Lewis, Grand Master, and Lucius H. Wakefield was appointed the first Master. The Lodge was named in honor of M.W. and Dr. John Warren, brother of M.W. and General Joseph Warren who was killed at the Battle of Bunker Hill, and one of the founders of the Massachusetts General Hospital. The first meeting was held November 23, 1860 and on June 12, 1860, John Warren Lodge was officially chartered.

John Warren Lodge has always been a small, friendly country lodge. With about 120 members, the membership is small by some standards, but no less enthusiastic. Our lodge has never been particularly affluent and met in a variety of rented facilities before building is current quarters during the 1950's. On at least two occasions, before moving to its present facilities, our lodge suffered disastrous fires. While the brethren lost their physical possessions, they did not lose their interest in Masonry and our lodge prospered. 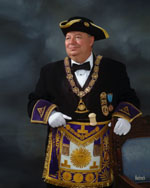 John Warren Lodge is an active lodge which supports the community and its members. We supplied the first statewide approved progam Masonic highway signs to other lodges. We administer the John Warren Masonic Angel Fund.. We support the Little League. We have an active Blood Program with the American Red Cross. Organizations in the community utilize our facilities. We have events for our members such as Octoberfest, a holiday party, Ladies and Widows luncheon, a Table Lodge and other events. At the start of the Boston Marathon, we welcome Masons from around the world.


John Warren Lodge and its members have a rich history and are proud of their service to their community and to their fellow men. We have always welcomed good men with an interest in joining our fraternity. If you are interested in joining our lodge, contact our Lodge Ambassador or Master by email or telephone to arrange a meeting